Nasyrul Quran is world’s second-largest Quran production centre has begun operations in Malaysia. The Nasyrul Quran Complex at Precinct 14 is the second biggest after the King Fahd Complex in Madinah. Nasyrul Quran complex's operations would be able to meet the domestic and global need for copies of the Quran as the Muslim population was expected to reach three billion out of the world's total of nine billion by 2050.

Nasyrul Quran could play a role by endowing the holy book to the needy. It was targeted to print one million copies of the Quran each year, with 70 per cent for domestic use while the rest could be contributed to other countries in need of it.

The complex also has exhibition galleries, skills training spaces, meeting rooms, surau, cafeteria, viewing gallery of the printing process, and administration and management offices. Malaysia too wants to contribute to the effort through its own bound volumes of the Quran. 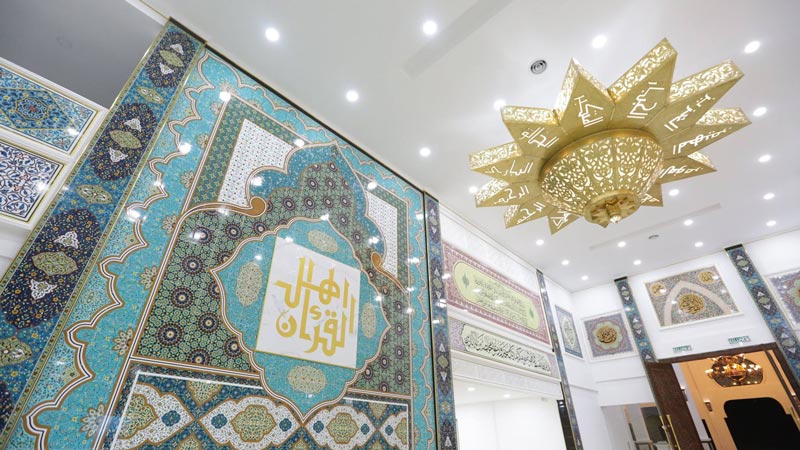 The Restu Research Islamic Architecture and Interior Design department was established in 2002 to introduce creative and traditional Islamic style of architecture and interior design of Malaysia. Its work incorporates a large extent of Islamic calligraphy and illumination. Since its establishment, the department has experienced major growth and many talents have been add to its staff to support its unique and artistic designs, and to meet market needs.

Some of the activities of this department are: Carry out research and development tasks regarding materials and designs suitable for a particular space/area, design and produce engraved surface tiles where special care is given to Illumination and Islamic elements, provide consultancy services for designs based on the Islamic concept of architecture, and provide construction materials for Islamic architecture project.