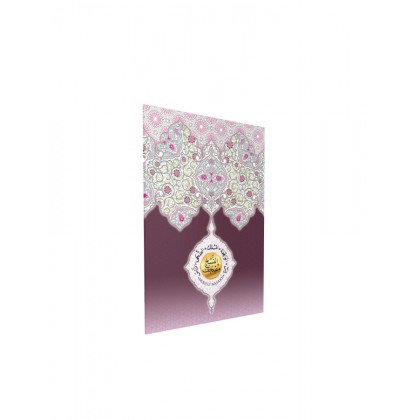 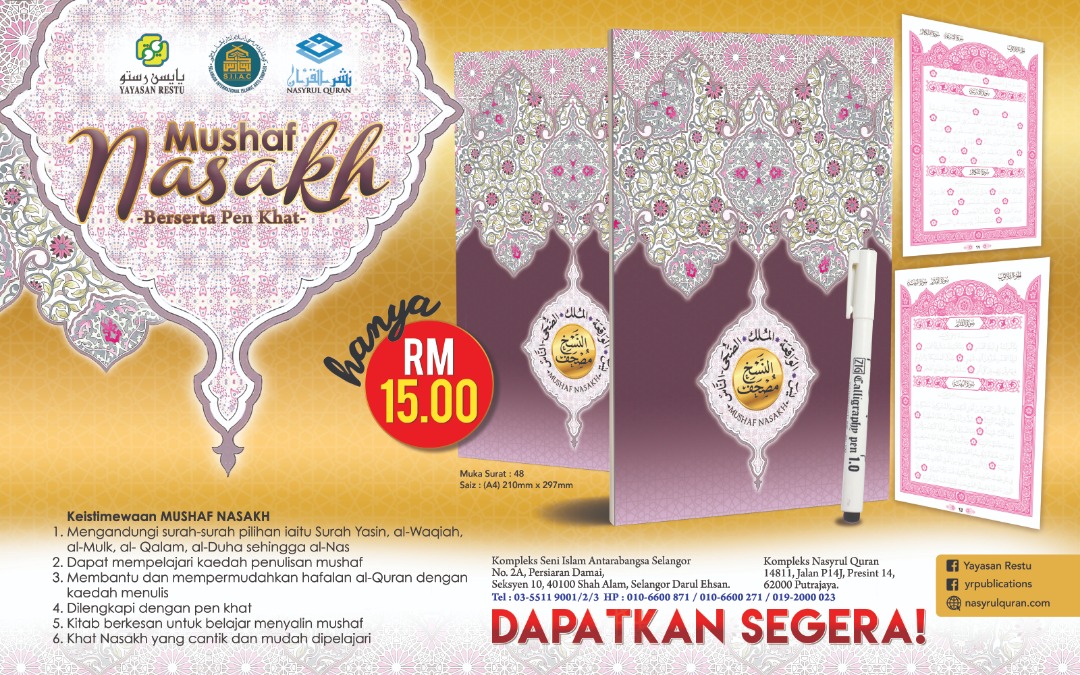 The benefits you will gain:

.
The benefits you will gain:

Copying the Quran is Sunnah

The best about this Mushaf and why you should own it?

We have completed the recitation of the Qur’an many times, and also to an extent memorised it, praise be to Allah. Some of us have memorised a few Surahs or Ajza’. However, have we ever written the Qur’an completely? Have our fingers ever written the Quranic verses that we have memorised? All this while, Qur’an memorisation involves the engagement of eyes and ears, but this time, memorisation is carried out through the act of copying. By copying, the hands including the skin and bones will have the sense of responsibility which would then influence the soul and spirit and hence, purify the soul and abstain oneself from evil doings. The most important thing is, in the Hereafter, the fingers will bear witness that they have been used in copying the verses of the Qur’an.

Why? This is because copying can enhance one’s memorisation skill as stated in Rasulullah’s saying: “Write everything that comes out of my mouth, for by the One whose Hands my soul is in, nothing comes from it except the truth.” [Narrated by Imam Ahmad]. As said by the wise: “Preserve your knowledge through writing. For we remember best what we write. This is because what we write will be transferred to the right brain.”

Copying the Qur’an involves three learning styles namely visual (the way one sees), auditory (the way one hears), and kinesthetic (the way one moves, works and touches).

Writing by using the “Follow the Line” method will shape one’s mentality which could then influence the brain and hence, develop the character that has originally been nurtured in humans. This is because all movements of the body are the results of brain function. Meanwhile, whatever movement involved will affect the brain in terms of developing one’s character. Then, it is presumed that, if someone writes the Qur’an, there must be some kind of effect in the human brain that would then shape and give rise to the individual’s character.

Among the characters developed through the act of copying the Qur’an are truthfulness, focus, concentration, independence, honesty, patience, discipline, determination, calm, righteousness, responsibility, submission, meticulousness, enthusiasm, sincerity and so on.

4. The best gift and inheritance for loved ones

This Mushaf provides individuals with a special experience of writing the Qur’an by one’s own hand. What do we leave to our descendants other than knowledge and properties? The best inheritances are indeed beneficial knowledge, ongoing charity and a righteous child who will pray for us. It is even more complete if we can also bequeath a Mushaf written by our own hand. Rasulullah (PBUH) said:

Glory be to Allah... it would indeed be an impactful and lovely memory. This Mushaf can become mushaf waqaf and part of our contributions to combating Qur’an illiteracy.

5. Going back to being natural and traditional

While everyone else got carried away by technology in the digital era, we return to the natural state. There is happiness in reminiscing past memories. By copying the Qur’an in a traditional way with pen and ink, it means that we are recollecting the memory by which we will gain blessings as did those before us, especially the generation during Rasulullah’s (PBUH) time and his companions, blessings be upon them.